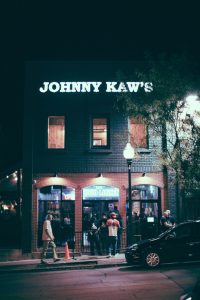 (One of Brett’s Locations, Johnny Kaw’s)

Given the opportunity, we decided to not only get to the bottom of the situation but we decided to make a way for positive change through it. 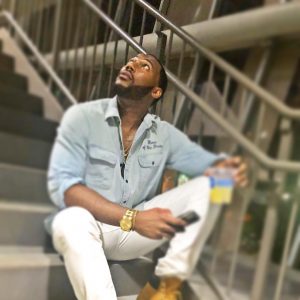 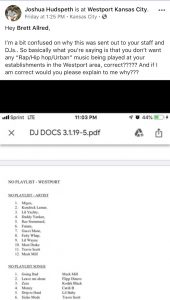 This post alone got well over 300 shares and 600 comments. It sparked a vast amount of dialogue for people on Facebook. The post gained so much traction that Fox 4 got involved as well as KCTV5. Both news outlets put out an interview with Hudspeth stating his opinion on how he perceived the “No Playlist”.

As the conversation moved forward, Brett Allred, owner of several Westport venues, commented on Hudspeth’s post. This added a different dynamic which lead to dialogue and resulted in both parties meeting up in person to discuss this topic in detail. 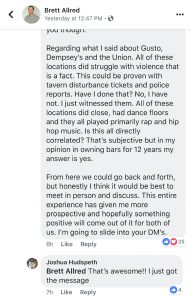 Let’s make note that throughout this whole process Hudspeth had been discussing everything side by side with our CEO Joshua Lewis. Naturally, when this meeting in person occurred Hudspeth wanted to make sure Lewis was there to participate in the conversation and to ensure that the conversation went well. Most of all, that they could create change. 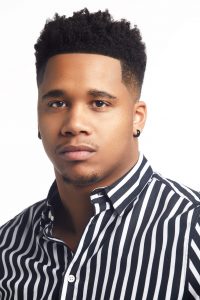 The conversation went really well, all topics of nightlife were discussed and not only that, but all parties were understood. So many things were manifested from this conversation that it was only right that going forward action would be taken. Brett has decided to meet in the middle on music choice, but also wanted to focus on keeping a safe environment with the new ‘Wand’ addition that is being implemented in Westport this “April”, which was something both Hudspeth and Lewis agreed on.

What was key during this process was all parties being willing to learn from this situation which lead to several resolutions getting accomplished. Progress was made and all parties were very excited about what is to come. This collaborative effect is an aspect that UpDown Nightlife can appreciate when it comes to KC Nightlife.

Stay Tuned on how UpDown Nightlife and some of Brett’s establishments will be partnering to create in the near future.