It’s no secret that Kansas City’s Westport District has been subject to a number of less than desirable headlines in the past. Just a few short years ago, Westport was considered an unfavorable and unsafe place for patrons to let loose on the weekends. This had a direct effect on a number of businesses, causing some to close their doors while others struggled to stay afloat. One of Kansas City’s most beloved and historic places was in danger.

Enhanced security became a necessity recognized by the City of Kansas City, Missouri and the Westport Community Improvement District. The new security program was established and performance metrics were put in place in September of 2018 for Friday and Saturday evenings between 11:00 pm and 3:00 am. These security measures are in place during the months of April through October based on the projected weather for those evenings and/or the availability of law enforcement to help secure the gates.

When speaking with the Westport Regional Business League about the results of this initiative, it was apparent that the district is moving in the right direction. Over the course of the first year, 286,254 patrons and employees were tracked through the walk-through metal detectors. Within that number, the reported number of firearm/contraband interceptions was quite impressive – 4 firearms, 2 box cutters, 29 knives, 6 tasers, 1 pair of scissors and 1 pepper spray fogger. Additionally, 2 guns that were hidden outside of the perimeter were recovered by Westport Public Safety officers after the hiding of the guns was observed via security cameras. 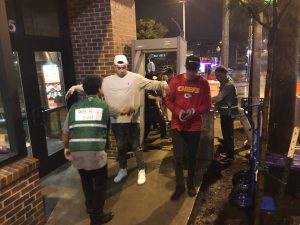 The WRBL also provided us with some statistics that helped put the trend of weapon offences into perspective for many people. In 2015, the Right to Bear Arms Amendment to the Missouri Constitution was passed which in turn increased the number of weapon offenses to 16 in the district in 2016. Then, as open-carry state statutes became more permissive in 2017, that number leaped to 66 which became a huge issue for public safety in the district and as many of us recall, a lot of gun violence in the streets of Westport. After the enhanced security was put in place, that number has plummeted to 10 in 2019.

Furthermore, the city required that the AdHoc Group Against Crime be present to monitor the screening processes and ensure that the civil rights of those individuals subject to additional screenings were in place and carried out in the appropriate manner. There were no reports of discrimination or possible discrimination made to the City of Kansas City during the first year of the enhanced screenings. 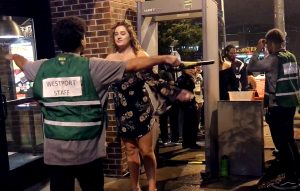 It seems that Westport and the community involved with the district will continue to be proactive in taking the appropriate measures to keep us safe. In fact, the number of incidents involving violent crime is down 65% in the area.

UpDown Nightlife always wants to provide a safe environment for our consumers to the best of our abilities. While it is clear that Westport has made great strides in attempting to overcome the hardships of the past, there is always room for improvement. This year they added more entrances and scanners to reduce lines and there will surely be more enhancements in the future. Remember, it is important to advocate for yourself, your safety and the safety of others. Don’t be afraid to voice concerns should you have them.